When humanity is all we have to offer 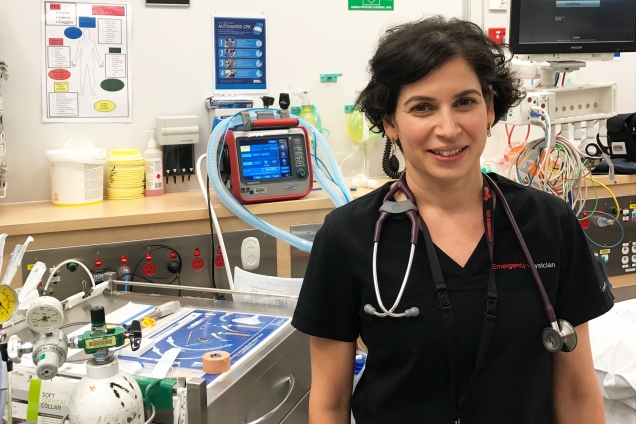 In her recent welcome address to a group of graduate medical interns beginning their placements with Gold Coast Health, Emergency Physician Dr Shahina Braganza reflected on what she describes as ‘the best job in the world.’ Dr Braganza has since penned this touching insight into the personal side of her profession.

I spoke to them about resilience. I talked about how the privilege of getting to be the person who helps guide patients and families during what is often the most vulnerable period of their lives has a massive trade off to which they must be alert: the risk of compassion fatigue, cumulative grief, burnout.

Recently, I looked after a woman in her early thirties. Let’s call her Emily. She had been completely well earlier that afternoon. She returned home from an outdoor activity and collapsed. By the time she arrived in our emergency department (ED), it was 60 minutes later. She had been given a total of more than 10mg of adrenaline and more than 10 DC shocks. We continued our efforts for a further 15 minutes until we got back a blood gas and performed a bedside ultrasound of the heart, both of which confirmed to us that any further efforts would be futile.

As I braced myself to go and speak with her family, I realised that, despite having done this several times before, this time I had no words. The main thought in my head was that I was wearing a bright yellow frangipani in my hair, and how out of place it was going to seem.

I sat with Emily’s husband (let’s call him Brad) and his two friends who had accompanied him. The social worker and senior nurse were also in the room. My consultant colleague had spoken to Brad a few minutes earlier to get some more information that may aid our efforts – I asked him to join me as he had already met the family.

I decided I had to cut to the chase: Brad was beside himself awaiting news of Emily and although what I was about to tell him would destroy him, I needn’t prolong the agony of getting there. I briefly ran him through what happened at home, what the ambulance service had done, what we had done – and that we had not been able to revive Emily. Normally I make sure to use the words “She has died”, so that there can be no misunderstanding. But I didn’t have the opportunity, as Brad placed his head in his hands and began to howl with grief.

All he could manage between his sobs was “Why?”

All I could manage in return was “I don’t know”.

When the social worker advised gently that Brad could come and see Emily when he was ready, he asked in torment, “How can you ever be ready for something like this?”

How can you ever be ready for something like this? Emily left behind a shattered family which included Brad, but also her two young children, and two parents who suffered the ultimate injustice of surviving their child.

I left the Relatives’ Room to return to the Resuscitation pod. An intensive care QAS paramedic who works with the High Acuity Response Unit (HARU) was still in the department. “Gary, it was a consolation to be able to tell the family with confidence that Emily had had the absolute best care in the community,” I told him.

Now Gary is, in my opinion, the best paramedic in the world. A few months ago, he spoke to our ED about his experiences in pre-hospital medicine. He told us about working in a war zone and transferring a patient who had unsurvivable injuries into a facility with no resources. He talked with a sense of anguish about making the silent decision to give this patient the total remaining doses of painkillers and sedative before he left him.

His closing slide was a painting that illustrated a paramedic treating a gravely ill patient in his home. In the background were a Christmas tree and a fire burning in the hearth. Looking on were the man’s young family in despair. For me it was a powerful portrait of the emotional environment in which our paramedic colleagues must do their job.

Despite the fact that Gary is an everyday superhero, he responded to my statement with “Thank you for saying that”.

The medical officer working with the ambulance team seemed almost apologetic that they had made the decision to transport the patient despite a prolonged resuscitation. “We wanted to make sure that there was nothing more we could offer”. I agreed that transport was the right decision – in the ED, we were able to obtain some further objective evidence to support ceasing resuscitation. In addition, the ED was the correct place to have the conversation with the family, to provide the additional support of a social worker and senior nurses, and to provide a space where they could say their goodbyes to Emily.

My consultant colleague was due to go home when Emily arrived. Without words or intrusion, he simply stayed. He accompanied the family to the viewing room (while I took over care of a man with drug-induced psychosis who was attempting to tear our ED apart); he filled out paperwork; he checked on other staff. When I suggested for the third time that he should go home to his own family, he softly replied “you go have a cup of tea and I’ll leave when you get back”.

The early shift registrar did the same. She contacted the coroner and the police. She also filled out paperwork. She set about finding lactose-free milk formula for Emily’s baby who was being exclusively breast fed until now.

Throughout the rest of the shift, I heard colleagues ask each other “Are you okay?” The administration officer brought nurses cups of water, muttering that they never looked after themselves properly.

In the midst of this horrible case and the sucky part of being in the best job in the world, it helped to be working with the best team in the world.

When I sat with Emily’s Mum some time later that evening, I asked her if she would like to tell me a little about her daughter. I learned that Emily had liked to sing since she was four years old, that she was a proud and doting mother, that her older daughter was currently Daddy’s girl but that the younger baby was firmly bonded with her Mum. She was a kind and thoughtful daughter, who had spent the previous day with her Mum, as today was Mum’s birthday…

As I immersed myself in the story, I was once again reminded that even in tragedy, even in grief and despair, we are truly privileged to be allowed into people’s lives. We can’t always make things better, but we can be there. When our clinical expertise has nothing further to offer, our simple sense of humanity must and can be enough.