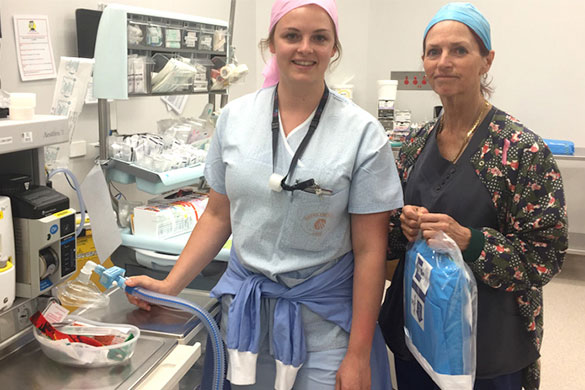 Amy Pech and Pam Brandis are part of the vital perioperative teams at GCUH and Robina Hospital.

They are the steady hands and calming voices you hear as you drift under anaesthetic before an operation and afterwards when you wake up in recovery.

But did you know a perioperative nurse is alongside each patient for the duration of each emergency and elective surgical operation?

Nurses are an integral part of the perioperative team responsible for elective and emergency surgeries.

Pam Brandis has been in the role for 20 years, moving through the three areas of theatre nursing – anaesthetic (pre-surgery), scrub scout (during surgery) and recovery (post surgery).

Her most memorable moment was getting in to theatres.
“I started in mental health on the wards and I really wanted to go to something more technical. That was in the mid-90s.”

She now thrives on the “nitty gritty” of being scrub scout.
“The technology is absolutely amazing. The scopes, the cameras (used in) keyhole. It just keeps improving. It improves so fast, I can come back from two months off and there are new machines, new drills or new air compressors.

Things just change so quickly,” Pam says.
“We are the patient’s advocate while they’re asleep. That’s to do with considering their outcome in all aspects because they’re unconscious. Positioning, nerve damage, so many details. They’re totally reliant on us.”

Amy Pech is on the anaesthetic nursing team and says teamwork plays an important role between perioperative nurses who liaise with each other throughout the patient surgical journey from admission and procedure to recovery and discharge.

Being alongside a patient prior to surgery has some challenges.
“A lot of patients have anxiety. I always find asking a patient a few personal questions, about their family, say if they have children or grandchildren and that generally brings the anxiety down - they’re thinking about something different. It’s a distraction technique,” Amy says.

Perioperative Nurses Week from 9-15 October aims to share the work of the specialised nurses with the broader community.