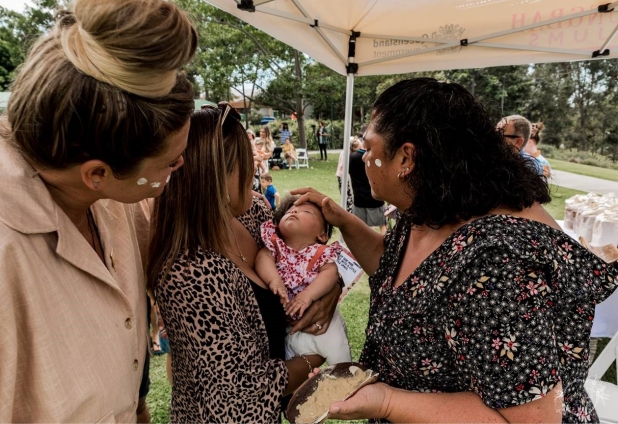 In the Gold Coast University Hospital Parklands, babies were welcomed to country by being carried through smoke in a traditional smoking ceremony and then painted with ochre.

It was a special moment for six-month-old Boston Cox’s parents Purdey and David.

“You don’t always get to connect with community, you just get busy with daily life and work,” Purdey said. “So it was really beautiful to come and be a part of it and meet other people.”

Purdey and David used the Waijungbah Jarjums Midwifery Service, a new service for Gold Coast Health which was launched in January.
**Service leader and clinical midwife consultant Cassandra Nest co-led the design and development of the Waijungbah Jarjums model of care alongside the Aboriginal and Torres Strait Islander community of the Gold Coast.

“Waijungbah Jarjums is one of the only services in Gold Coast Health that has been built from the ground up along-side the Aboriginal and Torres Strait Islander community,” Cassie said.

“When we look at the Aboriginal and Torres Strait Islander view of health, it is a holistic view. It encompasses social and emotional health as well as the health and wellbeing of the individual and the community.

For the Cox family, this has meant their midwife became a part of the family.

David said he valued the service’s inclusion of fathers through the Deadly Dads program.

That included learning to play the didgeridoo, painting and making boomerangs, but more than that, it was being able to connect with other Aboriginal and Torres Strait Islander fathers.

“Just having a yarn, everyone is talking about where they have come from and what journey they are on” he said.

The mothers’ yarning group connected through basket and jewellery making with local Aunties.

Beyond strengthening cultural connections, the service has changed families’ experiences with Gold Coast Health and improved outcomes for Aboriginal and Torres Strait Islander mothers and babies.

“We found our women were more likely to attend antenatal appointments because of the engagement they had with an Aboriginal and Torres Strait Islander midwife,” Cassie said.

“The women were more likely to have an antenatal appointment in the first 12 weeks and they were less likely to smoke.

“Our mums were six times less likely to have their baby prematurely which is important because it is one of the most difficult things to make an impact on.

“We have been able to make an immense difference in a short amount of time.”

Background
•    The service currently has five midwives, a clinical midwife consultant (Cassandra Nest), two child health nurses and two health workers.
•    It was piloted from January to June, 2020, and has received ongoing funding to continue.
•    50 women accessed the service during the pilot period
•    Women who participated in the pilot were found to be;
-    More likely to attend antenatal appointments because of the engagement they had with an Aboriginal and Torres Strait Islander Midwife.
-    More likely to attend an antenatal appointment in the first 12 weeks
-    Were less likely to smoke.
-    Six times less likely to have their baby prematurely
-    11 times less likely to have low birth weight baby.
-    Less likely to have a baby admitted to the NICU which saved more than 400 beds days and $1.5 million for the health service.