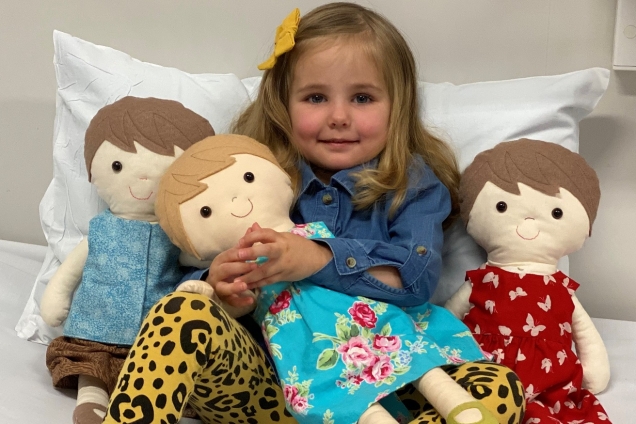 Emily Lavender with Milly and the rest of the Gold Coast Health Stoma Doll family lovingly created for young patients.

When toilet troubles started for Emily Lavender, her mother had no idea about the long road they were about embark down or the new best friend they would meet along the way thanks to a forward-thinking nurse and her crafty mum.
“Emily just started having issues going to the toilet,” mum Nicola said.

Toilet time became fraught with anxiety with the now three-year-old suffering excruciating pain everyday resulting in a growing fear of going to the toilet.
Emily was referred to the surgical team at the Gold Coast University Hospital.

“The doctor took a look at her and said, ‘I think her bottom could be in the wrong place’,” Nicola said.

Emily was eventually required to have surgery to create a stoma on her abdomen. A stoma is an opening connected to the digestive or urinary system to allow waste to be diverted out of your body. It is about the size of a cherry and red in colour. It is made by attaching the bowel to the surface of the skin. It is covered with a stoma bag which requires changing. It meant a huge adjustment for Emily and her family.

Play therapy has an important role in helping younger patients understand their stoma and in Emily’s case it meant introducing her to her new best friend – Milly.
Milly is a soft doll with her own life-size stoma which allows Emily to place and remove stoma bags like the ones she uses herself. These dolls are lovingly created and donated to patients like Emily.

“Before she got Milly we just stuck a little foam stoma on one her dolls and put a little a little bag on it,” Nicola said.
“She just sort of played with it and then we encouraged her, getting her to wear stickers on her belly to get her used to the idea that she was going to have something there.
“There was a lot of play involved.”
The preparation before the surgery ensured the three-year-old understood the confronting change.

“She was well aware that she was going in and she was coming out with this thing on her belly. That was one of things I wanted to make sure of. I didn’t want her waking up and being like huh, what is it this thing?’ Nicola said.

Since her operation in February, Emily’s quality of life has improved dramatically - much to Nicola’s relief.
“Stoma-wise she’s been great. She loves it, she’s actually proud of it and she’s happy to show people her bag.”

None of this could have happened without the dedicated team of Gold Coast Health Stomal Therapy nurses, Sheryl Waye, Kerrie Shuker and Lisa Blakey, and Lisa's creative mother Yvonne Howard.
“My son had Leukemia and we used to do dolls therapy with him when he was going through treatment,” Lisa said.
“We had a few paediatric patients who were struggling so I got my mum on board.”

Each doll is handmade and donated by Yvonne with loads of love.
“Mum’s had a bit of an education in stomas,” Lisa said.
Millie, Billy and the rest of the Stoma Doll family came to life and Lisa said the results for patients were immediate.

“Especially in that tricky age group, they can’t communicate what they want to say, so by us using the dolls just sort of instantly changes the whole dynamic. Whatever we are doing to the patient, they are doing to the doll and it just calms the whole situation,” Lisa said.

Nicola credits Milly, along with the work Gold Coast Health’s stoma nurses, with making the huge adjustment much easier for Emily.
“Without Milly I don’t think she would have gone as well as what she has,” Nicola said.
“I definitely think the doll has had a big role. It’s given Emily a little bit of control.”

There’s still a long road ahead for the Lavender family but Nicola is certain Emily will continue to thrive with Milly by her side.