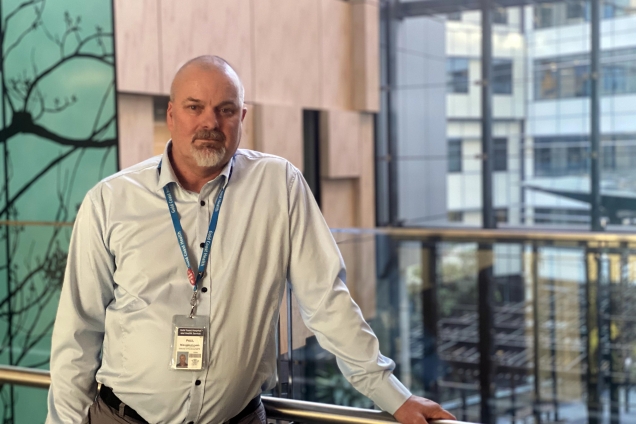 Paul Nieuwenhoven hopes his story will prompt men to be more proactive about cancer screening.

“Cancer runs in my family and it took my father’s life.”

Director of Nursing, Surgical, Anaesthetics and Procedural Services and Women, Newborn and Children’s Services at Gold Coast Health, Paul Nieuwenhoven, has plenty of stories to tell from his professional life, but he hopes it is his personal story that will prompt blokes to better look after themselves this Men’s Health Week.

“My father got prostate cancer at about 53,” Paul said.

“It was diagnosed early and he ended up getting radio therapy for it which was the right thing to do because he didn’t require surgery because it was contained within the gland.”

Unfortunately it wasn’t the same story when Paul’s dad Willy embarked on his next battle with cancer.

“Many years later he kept on saying that he was anaemic,” Paul said.

“And I said to him over a period of months ‘you must be bleeding from somewhere’ so he had blood tests. The blood tests were relatively normal apart from the fact his red blood cell count was down.”

Paul’s background in health meant he knew there was more to the story.

“So I said to him you should have a colonoscopy because it’s not the actual blood picture, it’s that you are bleeding from somewhere,” he said.

“It took a long time for me to convince him to do that.

“When he finally went around to having a colonoscopy, they found a significant tumour there and it had gone to his liver.”

“He had chemo and was about to have surgery but his liver metastases were too big to do anything about even though the chemo reduced the tumours for a while.

Willy died about 20 months after his bowel cancer diagnosis. He was 65-years-old.
“The message for me there was that prevention and screening is really important, if you have a relative, particularly a close relative that has cancer.”

Paul, now in his 50s, has taken the early detection message seriously and started getting colonoscopies at the age of 40.

“I have had polyps over the years sometimes it’s clear, sometimes I have got some,” he said.

“It’s the best way if you have got risk to identify these small benign growths before they turn in to something more nasty.

“And if you don’t have a family history there is that fabulous test you get sent when you are 50.”