Patient considers every day a miracle after terminal cancer diagnosis 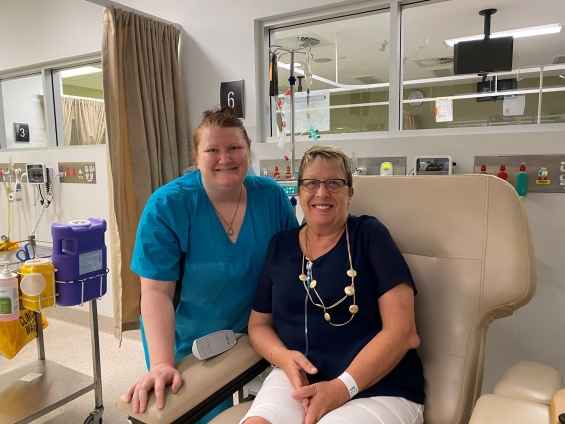 Helen Delaney was given eight months to live but thanks to what she calls her “miracle juice” the Gold Coast grandmother will spend another wonderful Christmas with her family – more than two and half years on from her diagnosis.

Helen was diagnosed with stage 4 lung cancer in May of 2018.

“The primary cancer was in the left lung and it was in the adrenal gland and in the bowel. My PET scan lit up like Surfers Paradise at night. There was so much cancer around,” Helen said.

“It was scary to be told you are not going to live.

“My son was due to get married a year later. I didn’t know if I was going to be around so there was a mad panic. I was supposed to be going to England.

“You don’t know how to react. You want to be strong for your family, so I couldn’t really fall apart. It was just case of trying to be as positive as I could.”

Helen initially started on chemotherapy, but it didn’t have any effect on the cancer which continued to grow.

“My wonderful oncologist decided he would put me on to immunotherapy, a drug called Nivolmab, which had been tested on melanoma patients,” she said.

“They had just started giving it to people with lung cancer. I was one of the very very lucky ones who reacted so well to it that every scan I had every three months after that, my tumours actually shrunk.”

Helen attends the Gold Coast University Hospital once a month for the life-saving treatment which is administered through a port-a-cath. Her treatment times have reduced from fortnightly and only take about half an hour.

“Now, after being told I had a terminal illness and not long to live, I have no active cancers cells. I have tumours and I have to remain on the Nivolmab, but I am alive and as you can see, I am extremely well,” she said. “It’s incredible.”

After her diagnosis, Helen left her job in the disability sector but at the beginning of this year found herself at home, bored and feeling well enough to work. She set up a business as a virtual assistant, calling on her background as a legal secretary.

“It’s such an incredible pleasure to see someone who was quite unwell at first coming with a diagnosis as Helen had and then having to go through chemotherapy which can be really difficult, now she has a big smile on her face, she brightens up all of the nurses' days and patients around her.

“Just the fact that she comes in once a month, sits down and has her treatment but otherwise goes about her life as she normally would have, is wonderful.”

For a person who is treasuring every moment, COVID-19 has meant extra challenges. Helen was not able to spend as much time as she would have liked with her family earlier this year during lockdowns, including her usual grandmother duties. Travel plans to America also had to be cancelled.

But Helen still considers herself one of the lucky ones and is looking forward to the future, including planning her 60th birthday party in April next year.

“I never thought I was going to make it it’s going to be a big bash.

“You find strength where you don’t know you have strength. You learn to ask for help. And keeping positive is the biggest thing you can do. And just fight. Get out there and try to live life to the full.”