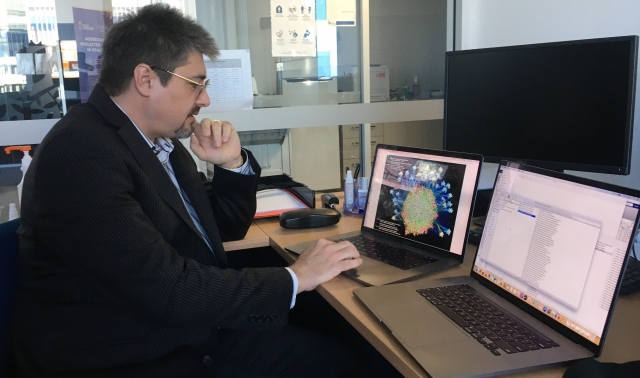 Groundbreaking COVID-19 modelling software designed on the Gold Coast is playing a key role in the fight against the pandemic – and its creators hope it will also help win the war against future diseases.

He pulled together a team to help him work on the project including colleagues from Bond and Gold Coast Health, as well as representatives from the Melbourne School of Population and Global Health, Central Queensland Public Health Unit, and the National Centre for Immunisation Research and Surveillance.

The software can replicate the outbreak of any disease in any city or region, using demographic details for the geographic area being modelled, as well as variables related to the specific disease.

“Agent-based modelling is when you create a population of agents, software people if you like, inside the computer and these people are quite independent – they can do things that people would do in the real world, they have autonomy, they can make decisions, they can interact with each other and this leads to a very lifelike model,” Prof Stapelberg said.

Over the past year, Prof Stapelberg and his colleagues have used their software to model real-life COVID-19 outbreaks in Melbourne and Sydney, as well as the smaller wave of COVID-19 on the Gold Coast in 2020.

Prof Stapelberg said the platform allowed them to model the impact of putting COVID restrictions in place, as well as removing them.

“This program can fluidly model changes such as social restrictions being put in place to try and stop COVID-19, and then removing these restrictions again, within the same simulation. We are not aware of other models where such changes can be made over time, ‘on the run’, within a simulation.

“Next we are quite interested in exploring how vaccination of the population might interact with the most effective (and minimal) social restrictions to help prevent the spread of the virus.”

He said the platform allowed them to model both the ability of vaccines to prevent COVID-19 in a population, but also the ability of vaccine to stop the spread of infection.
Prof Stapelberg said because of the partnership with the Central Queensland Public Health Unit, there was also particular interest in modelling a rural outbreak.