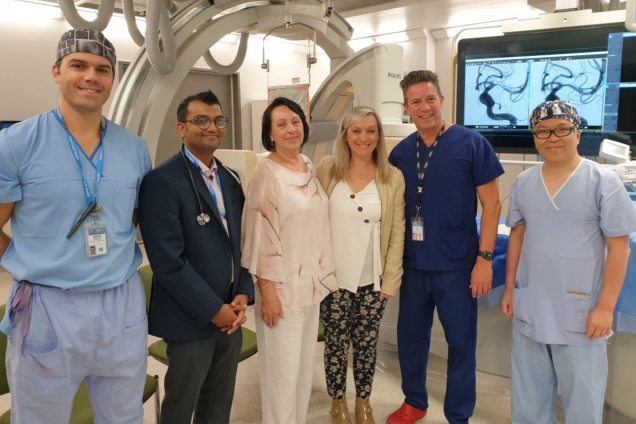 The first stroke patient in the world to have a large brain blood vessel clot treated with a robotic arm has been reunited with the Gold Coast Health clinical team who performed the groundbreaking procedure at Gold Coast University Hospital (GCUH) this year.

The reunion comes just ahead of National Stroke Week (31 August to 6 September). More than 56,000 strokes will be experienced by Australians this year, and more than 475,000 are living with
the effects of stroke. This is predicted to increase by one million by 2050.

69-year-old Hata Koro suffered a significant stroke in March 2020. Within two hours of presenting to the emergency department, Mrs Koro was being prepared for the world’s-first robotic assisted
Endovascular Thrombectomy in GCUH’s Neuro-Interventional Radiology suites.

Dr Hal Rice, who is one of eight interventionalist in Queensland, performed the procedure using the Corindus neurovascular robot which is currently being trialled at the hospital for treating
patients with complex brain aneurysms.

“Hata presented to our suites with an acute brain clot blocking a major artery in her brain that was reducing blood supply to important areas of her brain and presented a serious risk to her health,” Associate Professor Rice said.

“We were able to use the robot to safely remove Hata’s brain clot with extreme precision and ultimately make a real difference to her post-stoke recovery and final clinical outcome.”

Hata’s daughter Elda has been by her mother’s side during her journey and says while seeing her mum having a stroke was a heartbreaking experience, they are grateful for the care she received.

"We have such an impressive hospital and health system here. I was amazed at the expediency and organisation at GCUH where they had the triage set up for stroke patients,” Elda said.

"Both mum and I have been so surprised how quickly she has recovered, and with her progress so far. If this happened to mum somewhere else, the outcome would be quite different."

“Stroke is one of the leading causes of morbidity in Australia, and the lifetime risk of stroke has risen from one in six, to one in four and that starts at the age of 25,” Dr Shah said.

“While this exciting technology can allow us to treat patients who have experienced symptoms for up to 24 hours, it doesn’t detract from the importance of early recognition and a F.A.S.T response to the signs of stroke.”

The Stroke Foundation recommends the F.A.S.T. test as an easy way to remember the most common signs of stroke. Using the F.A.S.T. test involves asking these simple questions:
Face Check their face. Has their mouth drooped?
Arms Can they lift both arms?
Speech Is their speech slurred? Do they understand you?
Time Is critical. If you see any of these signs call 000 straight away.