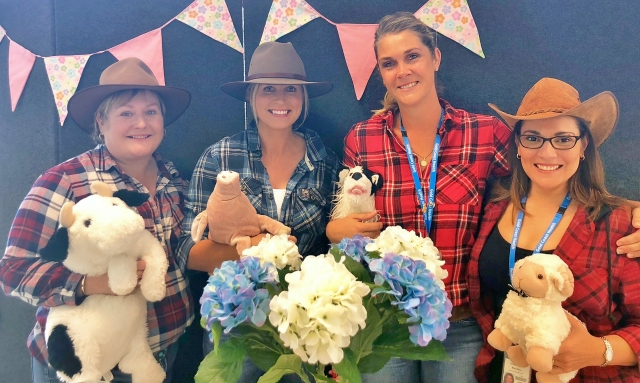 A Gold Coast nurse’s three-month exchange with a fellow nurse from Quilpie Multipurpose Health Service has led to a generous donation of hay for drought-stricken Quilpie farmers.

During her exchange, Ms Hewitt-Robinson saw first-hand the effects of drought on local grazing properties in the Quilpie region and shared her experiences on return to the Gold Coast.

So, when the Gold Coast Hospital and Health Service launched its “Goldie for a Grower’’ appeal to send semi-trailer loads of hay to drought-stricken farmers, the Quilpie region was chosen as the beneficiary.

Ms Hewitt-Robinson said she had enjoyed a rewarding experience being part of the friendly and supportive Quilpie community, with her best memory being how everyone worked together for the good of the town.

“I’m so pleased that the exchange led to the appeal, even though the people of Quilpie will probably say they are not alone in their hard time,” she said.

Gold Coast Health Chief Executive Ron Calvert said health service staff had raised $15,415 through the appeal, which had been donated to the Buy a Bale charity.

He said hay purchased by the charity with the proceeds of the staff fundraising would be transported to the Quilpie region later this month, with up to 13 farmers expected to benefit.

“I’d like to thank our staff for their enthusiastic support for the Quilpie community through this special fundraising appeal,’’ he said.

“A nursing exchange between Robina and Quilpie sparked the idea, and shows how these sorts of partnerships can have benefits that extend beyond our clinical work.”

South West Hospital and Health Service Chief Executive Linda Patat said she had no doubt the successful Gold Coast Health appeal would deliver a much-needed boost to farmers in the Quilpie region, as well as the entire local community, and show them they were not forgotten.

“It’s been a great effort by everyone involved and I commend Gold Coast Health and its staff on their support of this initiative,’’ she said.

“The Queensland Nursing and Midwifery Exchange Program is designed to help our nurses and midwives expand their skills base, learn new skills, build professional networks and open their eyes to a lifestyle and opportunity they may not have considered before.

“But it is also doing so much more. It is helping raise awareness of the challenges being faced by many of our fellow Queenslanders in rural and remote communities affected by the current crippling drought and building empathy and support for their situation.

“Our staff here in the South West live and work in communities impacted by drought and they too are affected by the challenges being experienced in the bush.

“So, it’s very special for us in rural health services to see such strong support for our communities – and therefore our own staff – by our colleagues in the larger, tertiary hospital and health services like the Gold Coast.

“We are certainly not alone, as this successful fundraising appeal shows.’’