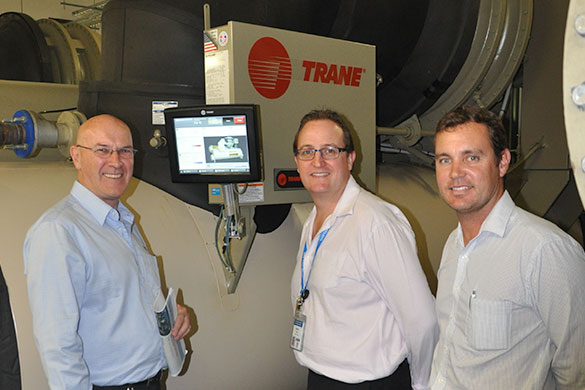 A new energy saving system - the first of its kind in Australia – is helping Robina Hospital cut down on its power costs. Siemens recently installed its Demand FlowTM energy optimisation system at the hospital.

The system uses variable-pressure-curve technology to optimise chiller plant control systems to reduce total plant energy consumption by between 20 and 50 per cent.

Within the first four months of operating, it has reduced total power consumption for the hospital’s chiller plant by 24 per cent. This has resulted in the hospital reducing energy consumption by 367,154 kWh, way ahead of its target of 221,314 kWh.

Robina Hospital has verified the first month’s savings as a 7.04 per cent reduction in total consumption for the hospital. Siemens executive general manager building technologies Stefan Schwab said the results meant the technology was delivering results ahead of its targeted savings.

“We are well on track to achieve the annual target of reducing energy usage by 792,091 kWh, and the resultant $95,051 cost saving,” Mr Schwab said.

“We were looking for ways to reduce the hospital’s energy consumption and were impressed by the results Demand Flow had achieved in hospitals around the world,” he said.

“In addition to significant energy savings, the work Siemens carried out at Robina provided the opportunity for us to consolidate chilled water infrastructure from three separate chilled water plants into one. This has resulted in a reduction to the ongoing maintenance requirements and costs for the facility.”

Mr Schwab said the system was an innovative example of the company’s technology.

“Demand Flow is one of the most innovative examples of Siemens energy optimisation I have seen,” he said.

“It’s the latest example of how Siemens harnesses innovation to lower costs and why we’ve installed more than 800 building automation systems around the country, including more than 50 hospitals.”