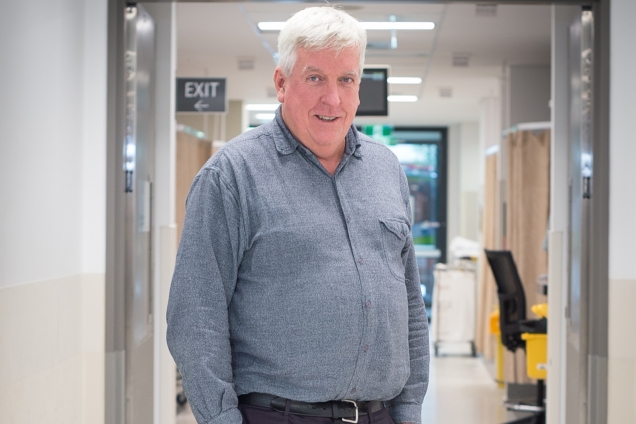 Gold Coast Health’s director of emergency medicine, Associate Professor David Green, was today recognised for his services to the community with a Medal of the Order of Australia.

Since joining Gold Coast Health as the very first registrar in the emergency department of the old Gold Coast Hospital on 12 June 1984, Dr Green has seen massive amounts of change, mostly in staffing levels and demand.

“There’s been huge changes in the health service, I remember when I first started I was the first emergency department registrar. It was extremely busy back then, but there were a lot less staff and very few doctors compared to now,” Dr Green said.

“It’s now arguably the largest emergency department in the country and we’re seeing a lot more of the elderly population to some extent.

“There have always been the same sort of social problems that affect emergency departments – alcoholism, homelessness, intravenous drug use, every other recreational drug use, domestic violence, people who are struggling with mental health concerns, the elderly with a huge burden of chronic disease and then risk taking behaviours.

“The game itself doesn’t change, the players involved do,” Dr Green said.

Of his medal, Dr Green said it was an honour to be nominated.

“Aside from years of working with patients, a lot of work I probably did to benefit the community was through the Australasian College for Emergency Medicine where I served as an examiner for over 20 years and a Queensland censor for 7 years. I was very involved in the development and direction of registrar training during that period.

It’s this training of emergency physicians which continues to be a source of pride for Dr Green.

“We have a huge number of registrars and provisional trainees at both GCUH and Robina and a really good record of training and teaching.

“Teaching and research are the two things I’m most proud to see expand under my directorship,” Dr Green said.

After more than 30 years working in the high pressure environment of emergency medicine, Dr Green maintains his focus on serving the community and delivering the best possible outcomes for patients.

“The trouble with healthcare is that it becomes political and the politics is so often based on simple numbers that measure complex things,” he said.

As for his plans for Australia Day, Dr Green says he’ll be enjoying his favourite past time of fishing.

“I hope to be out at sea pretty early looking for marlin, dolphin fish and wahoo.”

Sounds like a pretty good way to celebrate to us!

Dr Green will be presented with his Medal of the Order of Australia at a ceremony in Brisbane.