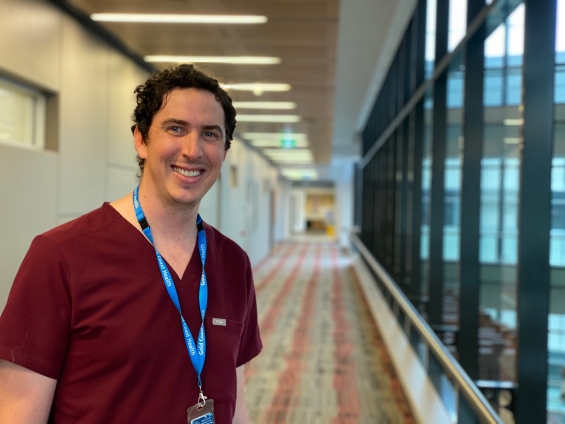 Dr Alex Dorrington says the IBD team's goal is to get people feeling back to normal.

Do you know the difference between Irritable Bowel Syndrome (IBS) and Inflammatory Bowel Disease (IBD)?

Gold Coast Health staff specialist Dr Alex Dorrington explains the difference between these often-confused conditions and why early intervention for IBD is important.

“IBS is a non-inflammatory gut problem characterised by a change in the bowel often with discomfort and pain. Bloating is very common and it’s a very common condition,” he said.

“IBS can be triggered by stress or a gastro bug or can come on for no reason as well.
“You will have symptoms for at least four weeks. You can have periods where it’s not too bad and when it’ll flair up again.”

Dr Dorrington says this can be like what people with IBD can experience which makes diagnosis tricky. But there are clear differences.

“IBD is an inflammatory condition. There are two main conditions that fall into IBD, Crohn’s Disease and Ulcerative Colitis,” he said. “Like IBS, people with IBD can suffer from diarrhoea and abdominal pain but the red flags we look out for are blood in the stool, unintentional weight loss, waking up in the middle of the night with pain or needing to go to the toilet urgently and unexplained mineral and vitamin deficiencies.

“Unfortunately, we don’t have a cure for either IBD condition and one of the challenges is that we don’t full understand why it starts. Genetics can play a role and there seems to be environmental factors as well.

“Because we don’t fully understand why IBD develops, it’s hard to target something to cure it but the good news is that we do have lots and lots of effective treatments to manage it and there seems to be more drugs becoming available. Plenty of people are able to get the disease under complete control where they have no symptoms and live their lives. Our goal with treatment is to get people feeling back to normal."

Dr Dorrington said delays in diagnosis can lead to advanced complications even resulting in the need for surgery and encouraged people with symptoms to speak to their General Practitioner.

“IBD is often diagnosed in in young people, between the age of 15 and 40 years old and it is becoming more common – there’s been a clear trend over recent decades," he said.

“GPs can arrange testing and if there are concerns, they will refer the patient to us for further investigation.

“There’s a really good non-invasive way to determine between IBS and IBD. There’s the faecal-calprotectin test which Medicare has made free for people who have had diarrhoea for a pro-longed period.

Today is World Inflammatory Bowel Disease Day to find out more about symptoms and support go to https://crohnsandcolitis.org.au/