Heart attack survivor beats the odds to give back to others 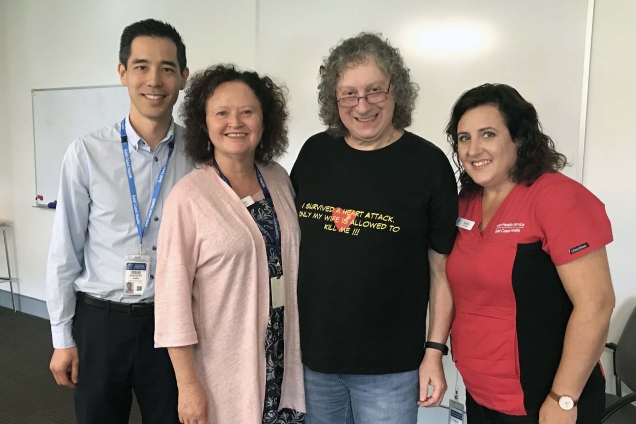 A Gold Coast man who had 29 cardiac arrests during an emergency heart procedure has joined with doctors to warn other people living with diabetes to watch out for signs of heart attack.

Dani Katz was a 54-year-old smoker with long-standing Type 2 diabetes when he had a heart attack 12 years ago.

“Typical symptoms of a heart attack are feeling chest pain, like ‘an elephant on the chest’. I didn’t have anything like that. I had a low intensity burning sensation across and chest and was sweating profusely,” Mr Katz, now 66, said.

Gold Coast Health cardiologist Associate Professor Atifur Rahman said coronary heart disease was recognised as the cause of death for 60 per cent of people with diabetes.

“People with diabetes are four times more likely to have a heart attack or stroke.”

Dr Rahman was leading the clinical team who performed the emergency procedure to save Mr Katz’ life by using three stents to unblock his right artery in 2007.

“Dani was very fortunate – his quick-thinking wife called the ambulance immediately and they arrived with a defibrillator and performed immediate resuscitation which gave Dani a chance of reaching the hospital where he had an urgent after-hours coronary angiography.

“Dani was brought back to life 29 times in the ambulance, emergency department and in the cardiac catheter lab when he was having a heart attack. It’s the most resuscitations I’ve ever performed on a patient who survived,” Dr Rahman said.

Mr Katz went on to have triple bypass surgery at Princess Alexandra Hospital the next week.

Since his heart attack, Mr Katz has had annual check-ups with the cardiology and endocrine teams, manages occasional angina with medication and has a chest pain management plan.

“My heart attack changed my life – I gave up smoking and started exercising every day. I’ve adopted a positive attitude. If I felt sorry for myself, I’d get nowhere fast.
He is now a peer educator, sharing his personal experience every six weeks with participants of the Gold Coast Health cardiac rehabilitation program, delivered from Robina Health Precinct.

Every year about 400 people recovering from a heart attack take part in a six-week rehabilitation program which provides professional support to learn exercise techniques and better lifestyle habits.

Mr Katz shares his personal experience during an education session during the program.

“It’s still cathartic for me (telling my story). It helps me deal with it and hopefully gives others some motivation that life after a heart attack can be fulfilling,” Mr Katz said.

“The cardiac rehab program is one of the best kept secrets. You never know about it until you need it.”

If you are having chest pain or other signs of a heart attack, call 000.